Chelsea travel to North London to play the 2nd leg of the Carabao Cup semi-final against Tottenham. Chelsea have a 2 goal advantage going into the game but there is no away goal advantage. Spurs go into this game having beaten Morecambe during the weekend and will have to score a minimum of 2 goals without reply to take the game to extra time. Spurs in the first leg were extremely poor for much of the game so there is alot of room for improvement in this 2nd leg.

Chelsea go into this game with the 2 goal advantage and having beaten Chesterfield 5-1 in the FA Cup. Tuchel pre-match said that the advantage doesn’t exist and the players need to treat this as a one off game. A tough team at a tough stadium with an amazing coach. Chelsea can expect tougher opposition with Spurs at home and Spurs will have to come out fighting in this game. The first leg was straight forward but Chelsea could have easily scored a few more and finished this tie off.

Kepa should return to goal after the rest during the weekend. I expect a back three of Azpilicueta, Silva, and Rudiger. Pulisic, and Alonso should start as the wing backs with a midfield of Jorginho, and Kovacic. Mount, Ziyech, and Lukaku should start up front for Chelsea. Plenty of these players were rested during the weekend and should be fresh for this game. The likes of Werner, Hudson-Odoi, Havertz, Saul, and Kante should be available off the bench. Chelsea did switch between a 3 at the back and 4 in the first leg and I expect the same here. Pulisic, and Ziyech can then move up with Azpilicueta, Silva, Rudiger, and Alonso as the back four. Lewis Hall is also still with the squad after his brilliant performance against Chesterfield. I doubt he will start as a left wing back in this game. It’s a good lineup and one that has players in some sort of good form.

Tottenham will not have Son available for this game as he has been ruled out for the month. Conte was able to rest key players during the weekend but the likes of Moura and Kane did eventually come on to get the win for Conte. Lloris should start in goal with a back three of Tanganga, Sanchez, and Davies. Emerson, and Reguilon should start as the wing backs with Skipp, and Hodjberg making up the midfield two. Moura, Gil, and Kane should start up front for Spurs. I doubt there is a gung ho form of Conte but maybe Alli could start in one of the midfield positions if they want to attack more or Winks. 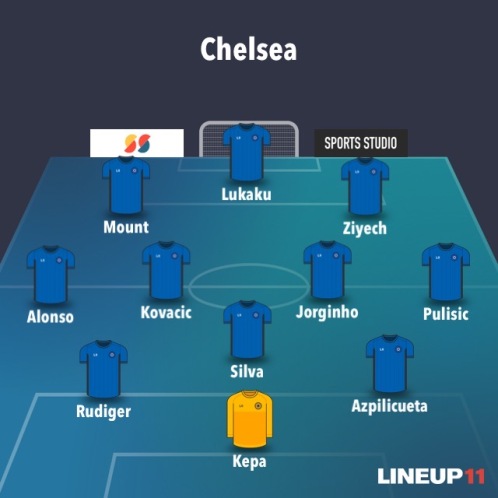 Tottenham failed to bring the fire in the 1st leg and Chelsea dominated the game. The 2nd leg should see Tottenham come out fighting because they are at home and the crowd will demand it. Cheslea will treat this game as a one off and will know the job is not done until the whistle has blown to end the game. COME ON CHELSEA!!!