Happy New Year everyone, it is 2021 and as the year 2020 goes we hope that we can learn from what we went through last year and build for a better future so we can have a better year and many years to come. The same can be said for Chelsea as they welcome 8th placed Man City to Stamford Bridge for our first game of the season. Man City have not been themselves this season similar to many other teams but inconsistency and uncertainty has really seeped into Pep’s team. City have only played 14 games so they have 2 games in hand as they sit level on points with us. Having won 7 drawn 5 and lost 2 this isn’t the worst start for them and they have been in decent form recently. They have won 3 of their last 5 and drawn the other 2 as they continue to climb the table. If City were to win their 3 games at the moment they would go straight to the top and so this isn’t the worst position. Scoring goals has been an issue for City this season though as they struggle to break teams down.

Chelsea enter the New Year having endured a tough festive period once again. Lampard and co only managed 1 win out of 5 with 3 losses and a draw as we sit 5th in the table and 7 points behind Liverpool. It could have been worse but the fact that most teams have been playing poorly in general has kept Chelsea holding onto the conversation. For Chelsea the key has to be to learn from the mistakes of last year, and regain that hunger and focus that we had up till the Leeds game. Since Leeds we seemed to have lost our drive and energy and while we regained some of it against Villa and put in a better performance we need to amp it up against City. Having not even reached the half way point there is still a very long way to go but our next 3 months could decide our season and so we need to have a very good period over the coming weeks and months.

Lampard has stated that we will be without Reece James who has a slight hamstring issue but everyone else is fit and ready to go. Since our next game is next weekend we should have no issues in fielding our strongest XI. Mendy should start in goal with Azpilicueta, Zouma, Silva, and Chilwell making up the defence. Kante, Mount, and Havertz should make up the midfield with Pulisic, and Hudson-Odoi playing as they wingers. The striker situation is the tricky area but I would play Werner as we should find joy on the counter and against Pep’s open style of football. Tammy, and Giroud are great options to have on the bench while Ziyech should also be back on the bench but I don’t think he will be able to start. Some youth players have been training with the squad but I think that’s more for the Morecambe game than anything else. There is plenty of pace and creativity in this team and while Pulisic was the only real threat against City last season hopefully as a team we can cause them even more problems this season.

Man City will be without Ederson, Jesus, Torres and Walker for this game as they and 1 more player all tested positive for Covid this week. City had to miss a game last week because of several positive tests at the club but they have managed to train this week ahead of the game. Ederson will be a big miss and Scott Carson will most likely step up for this game. Cancelo, Dias, and Stones have been mainstay’s in defence for City this season but with Walker out I expect Ake could start with Cancelo switching to right back. Rodri and Gundogan have formed a good midfield partnership while Sterling, De Bruyne, and Silva have played further forward behind Torres. Torres will miss out due to Covid but Aguero will be raring to go most likely. It’s a strong team and one that has plenty of pace, creativity and solidity in defence. 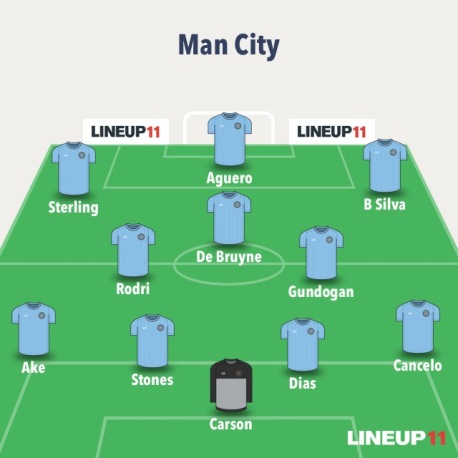 Every game is a big game but hopefully Chelsea can channel the performance they put in last season against City post lockdown. Our team has so much quality and its now up to them to banish the final few months of 2020 and start 2021 with a return to form and to continue that. Most of all our German’s need to get their head right starting this game. COME ON CHELSEA!!!